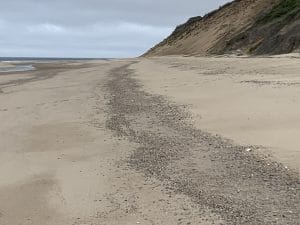 In the beginning of May my husband and I booked an airbnb in Truro, arriving on Memorial Day and leaving the Friday after. Truro is close to both the bay and the ocean, and as it happens, our apartment was a ten minute walk to Chequessett Chocolate.

With a stop in Falmouth to see cousins, we arrived late afternoon. The next day we biked through the dunes, and along the scenic rail trail the day following. On the Thursday we took a long walk on the beach, accompanied by seals, and we spotted a coyote meandering near the dunes. We caught up with friends one evening, and enjoyed a delightful dinner in Provincetown. All in all, a lovely, refreshing time, and just what we needed.

I mentioned to my 93 year old mother that we were going to the Cape, and unexpectedly she said, “I have one regret about the time your dad and I went to Truro.” The color drained out of my face, and I got a sick feeling in the pit of my stomach. This was something I had not heard about, and I worried about what could possibly have been so terrible that she was carrying regrets about it fifty years later? Something that had been caught in the net of her finicky memory. I braced myself, and whispered into the phone, “What was it, Mom?” I had to hear her out if she was brave enough to tell me.

“What?” I asked. Usually able to detect where she was going, I was clueless on this one. Did she bump into someone? Trip on something? Step on a live crab?

“When we went to the beach, I was too shy to look down, and I just kept looking up. It was a nude beach, and I missed my opportunity to see all those bodies.”

Ooooooh! No wonder my psychic sensor was off. The safety latch on considering one’s parents on a nude beach kept that possibility firmly out of reach. I burst out laughing in relief. This was not something that she had said to my dad that she later felt bad about. Stunned that this had made such a strong impression on her, I fumbled with how to console her. “Hm, yeah, Mom. I guess it’s too bad that you missed that opportunity?”

I recounted this episode to my long time friend Jennifer, who had her own story about that beach. As a young bride, she would sometimes go out with her fisherman husband on his boat. One very early morning, she felt a bit seasick and asked him to drop her off on a beach where she could take a nap, and come back for her later. He obliged and she pillowed her face in her arms and slept soundly in the predawn hours. When she awoke, it was very bright out. She lifted her head, and found herself staring into the naked crotch of the man in front of her. Stifling a yelp, she turned herself onto her side, and sat up facing the ocean. It was clear that she was Alice in the middle of a gay man’s nude beach that she hadn’t known existed until that moment. As she gathered her thoughts, a scantily clothed woman riding bareback on a beautiful white horse rode splashing through the shallow waves. Now uncertain about which dimension in which she had awakened, she spied her husband’s boat in the distance and ran to the shore waving frantically. Fortunately she caught his attention, and he nearly wept with laughter when he discovered the situation that she had found herself in.

Our five days in Truro did not feature anything like the excitement of either my mom or my friend, but I would still highly recommend a few days there. And we learned that Trip Advisor features reviews of the nude beach if you’re interested.