Birthday in a covid-19 world 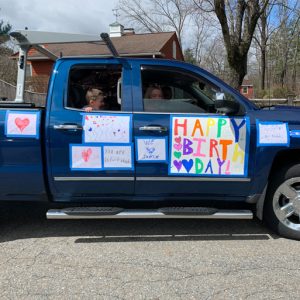 We celebrated our daughter Gale’s 30th birthday today.  It was not what we had planned for the day, of course. I had made lunch reservations for our two daughters and ourselves in the Newburyport Lighthouse, which we were keeping as a surprise. We hinted at it, letting her know that it would take some time to get there from Littleton, and we could all gather at our home and then head out an hour ahead of our 12:30 reservation. I was excited to have landed a Groupon to make this extravagant experience more affordable.

When the first restaurant shut down occurred I realized that we were just inside the date, but we would be the only diners! Socially distant, check! But as the days passed we realized that even if the Lighthouse Society could bring in what was essentially take out from the restaurant we chose (one of three options), the four of us represented three different households, and each of our daughters has at least two other roommates, so this treat would have to wait. The appeal of the intimacy of the setting was exactly what now made it undoable.

Earlier in the week we decided to keep the date, but gather at our house, and we could picnic outside with our take out. We so wanted to support our incredible local Korean restaurant that was including free rolls of toilet paper if you asked, as well as some fruit if needed. They provide free meals to health care workers and the elderly in addition to making outstanding food.

At Gale’s request I baked a dense orange cake with a lemon/orange glaze that would stand up well to a bunch of candles. We figured out the wiping down of all the cartons, and hand washing before handling any of our dishes or cutlery and we each used our own serving utensil. Bibimbap is the best: rolls off the tongue when you say it, and an exotic blend of flavors when you eat it.

Bringing the lighted cake outdoors was a bit of a challenge, as there was a little wind, and my husband and I struggled to keep the candles lit as we approached the birthday girl, singing a jaunty rendition of the traditional song. We only needed to relight a few of them en route. Just as Gale prepared to blow them all out, Kate, our other daughter shouted “Wait!” We all realized that blowing them out was exactly the thing to avoid, so I started waving the cake around in an effort to get the candles out. Most of them cooperated, but a few stubborn ones insisted on relighting once I stopped moving. And they are not trick candles! They are very tall and festive, maybe six inches in length and sparkly silver. I raced back and forth across the deck like a maniac, holding the cake as steadily as I could, then doing some circles before Gale stopped me, plucked out the two offending candles and whipped them through the air which blew them out for good.

Whew! There was one designated cake cutter who slid pieces onto plates without touching any part of the cake itself. We could still add vanilla ice cream of course.

The hardest part was the greeting and leave taking as we gave each other a casual wave and kissed the air. My heart ached to give our daughters a big hug, to hold them close, to enjoy this event in the way that has always felt best. They had each refused any beverage in order to avoid needing to come in to use the bathroom, and thus our visit was necessarily no more than a few hours. It was a new kind of lovely, laced with a touch of bittersweet. And we still have our Lighthouse meal to look forward to sometime in the months to come.