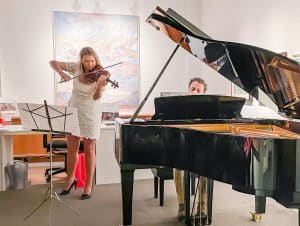 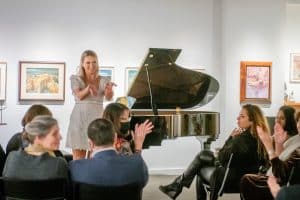 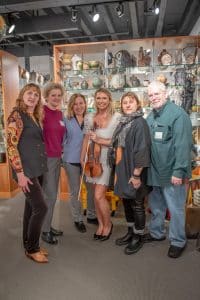 Passion and vision are a powerful combination. Add the talent of the dynamic Egle Jarkova, and you are happily swept into the musical dreams and reality that this prize winning violinist creates for herself and others.

As I entered the Pucker Gallery ahead of the 6 pm start for the fundraising concert for the Vivace Vilnius International Summer Festival, I was afforded a few moments to take in the space itself. The largest room, where the concert would take place, was filled with the work of Samuel Bak, a Vilnius born painter, Holocaust survivor, and current United States citizen. His works evoke the scenes and landscape of a challenged Vilnius, as filtered through his memory and experiences which created a fitting backdrop for the musical event. Vilnius is now a vibrant cultural hub for artists and musicians.

Jarkova started the festival eleven years ago, vowing to pay forward the assistance which made possible her musical studies. As one of five children, the Lithuanian born musician states she would not have had the opportunities to hone and nourish her craft otherwise. Her full scholarship at Boston Conservatory at Berklee afforded her introduction to her first sponsors and supporters to create the festival.

Lynn Chang, her professor during her studies at Boston Conservatory at Berklee, noted that she was a student at the time of the Boston Marathon bombings, and felt compelled to DO SOMETHING to help. She brought her piano trio to the hospital and played for patients there-undoubtedly a balm for all. This was evidenced by the spontaneous offering of financial support from one physician for the festival that was at that time a one time notion of Jarkova’s, and he handed her the first check to transform this creation into an ongoing reality.

The program included a combination of musical works and speakers who have been involved with the festival, most of whom have been dedicated since the beginning, and have contributed and born witness to the growth over the past ten years.

Jarkova, accompanied by pianist Jonathan Bass opened with a work by Arvo Part, a spellbindingly lyrical and wistful work that evoked a heart-felt connection to the artists, and to anyone who has yearned and hoped for something more.

This was followed by Riley Beggs on classical guitar, playing Maurice Ravel’s Pavane pour une infante defunte (pavane for a dead princess), a continuation of a mournful theme, yet again, rather than finding it depressing, what came through was Begg’s total immersion in his work, and the audience of an intimate fifty people bearing witness, and being there together.

Speakers included physicians who are also connected to music, and the interplay between medicine and music, including music therapy, which is also fostered at the festival. One speaker remembers saying to Egle that they would need to advertise the concerts in Vilnius so they could boost attendance. “Oh no,” she reassured him. “We just need to tell them that it’s happening.” Indeed, classical music is more tightly woven into the fabric of culture in Vilnius, and people are eager to connect with it. The 79 free concerts, some in historic cultural venues and museums, performed by world class musicians, have been attended by thousands of people. Now ten years out, the young musicians who have attended have gone on to launch successful musical careers of their own, and have expressed their deep gratitude for what they learned at Festival.

Jarkova continued with a Hebrew Melody for violin and piano. Again in a minor key, the tone was impassioned and imploring, with every ounce of Jarkova’s feeling for the music revealed in the notes that emanated from her vibrating strings.

Lisa Wong, MD, and Lynn Chang shared thoughts about their participation in the festival for nearly a decade, and played Florence Price’s Desired Garden and Adoration. 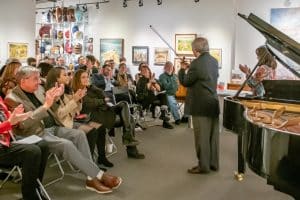 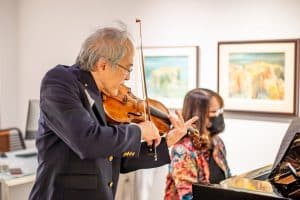 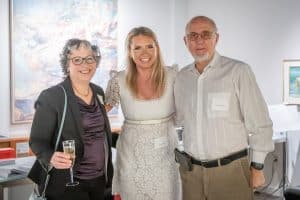 David Viola (perfectly named), one of the festival’s supporters who came to Vilnius in 2019 and 2021, informed us about supporting the festival and Jonathan Bass (piano) concluded the program with three pieces by Frederic Chopin, ending with the more upbeat and hopeful Grande Valse Brilliante. His virtuoso performance was a terrific flourish and dramatic ending to the program as well as a nod to the Vivace (brisk, vivacious) part of the festival’s name.

Sitting just a few feet away from these outstanding performers was an unparalleled treat. Each one was there because he or she believes in their art, in the importance of nurturing the upcoming generation and providing community and assistance to those who need it. The thread to the audience was palpable, as each musician embodied their work, bringing it to us from the depths of their souls.

When Egle invited me to attend, she was unaware that my father was a Julliard trained oboeist, and music educator. Nor could I have known that the program would include works of Chopin, a composer my beloved piano teacher of ten years adored so much that he created a dramatic program in which he dressed and spoke as Chopin, interspersed with performances of his work.

It was a thrill to be present at this event, from every vantage. The musicianship, the compassion and the deep desire to share their expertise, not only with us, but with musicians from around the world, left me feeling full. I’m sure we were all filled with hope, connection, and the honor to be able to participate.

2.  Free concerts from highly regarded Boston are professional musicians and musicians from Europe for people in Vilnius who have a deep love and regard for both classical music and highly trained musicians.

3.  Bringing doctors and educators to Lithuania to lecture and share papers and clinical expertise on musical therapy.

4.  A cultural exchange of musicians, students and others who use music to bridge a cultural and lingual and medicinal divide to share a common love.

This past year was noteworthy because the festival included students from war-torn Ukraine.

For more information, please visit www.vivacevilnius.org or send an inquiry to egle.jarkova@gmail.com

Meg Stafford can be reached at megstaf@aim.com. Her newest award winning memoir, Who Will Accompany You?   Can be found at www.MegStafford.com or on Amazon.com