Contradictions in Columbia; Where the Cows Really Do Come Home

It is many of the everyday things that we take completely for granted that are different in a tropical place like Colombia. I had been fooled by the modernness of the large city of Medellin, and touristy section of Cartagena, especially by staying in hotels which are thriving by accommodating westerners. It was not until arriving in the countryside that I understood how different the relationship with animals would be.

Hiking up two hours to where my daughter Gale is living I am struck by the natural beauty of the place as well as the fact that country life in a hot and humid climate by itself dictates many differences from what I am used to in the American Northeast. The differences expand out from there once you add in the country of Colombia, the fact that her village is rural by any standards, and then the fact that this village has made a point of declaring its neutrality in a country that continues to be rife with conflict.

The hike, although not arduous in terms of technical difficulty, is steadily uphill through rolling and sometimes steep hills. I get winded at times and Gale reminds me that it is very humid, and that I am carrying 15 pounds on my back. This feels like small consolation, but we are all dripping when we arrive at her little home.

There is one sink in a home, composed of two parts. Made of concrete, the right hand side is a large tank filled with water. On the left hand side is a downward sloping surface that drains at the bottom. A plastic bowl is used as a scoop to get water for rinsing dishes, or teeth, or clothing, depending on what is currently being washed. It takes a little time to get used to it, but it is easy enough to splash water on our faces to cool off immediately (until we have the energy for a quick cold shower). It is also a relief to remove the knee high mud boots and socks which are much too warm now that they are not necessary. There is a hammock tucked off to the side of the main room and another on the small back porch. The young women who have hiked up the mountain with us each climb into one and fall immediately asleep. 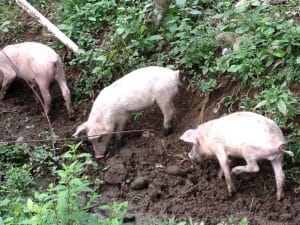 Gale and I go back outside and sit on the stoop directly outside the door. I can see other similar small dwellings further up and down the hill. Three little pigs walk by, grazing and moving without once looking up from their work. I wonder how they even get anything in their mouths, but during my two day stay they wander by a number of times, like tiny vegetarian land sharks, ever moving and eating.

The horses, cows, dog, and chickens also roam quite freely. Gale and her housemates take advantage of this by tossing banana and papaya peels outside for them to eat. I practice taking aim with my peel from the kitchen out the six inch square window to the back yard. Once a horse paused long enough for us to show the banana peel and it obligingly sauntered over to take it out of our hands, much to my delight.

This is not to say that I could engage the horse any other way. When I heard that the animals roam around I had wondered aloud whether I might be able to ride on a horse. “Well,” Gale had replied. “You’ll see.” I now understood that it was not easy to explain this seeming contradiction. The animals roam free, but that does not mean they are friendly or seeking interaction. In fact, I realized they would be quite unaccustomed to people from the outside, unlike any American farm I have visited. Even most of the dogs, while happy to congregate on the porch, do not look for affection, except from the family with which it lives. All the skinny animals are happy recipients of whatever food scraps are being offered.

One cow in particular, a cafe con leche colored beauty whose tan fades as it moves toward her belly, was particularly forward. Gale and her housemates had dubbed her “Daisy” and had on more than one occasion needed to usher her out of the house. Gale confessed that Daisy had once peed in the house. WHAT?!! I was appalled, but her roommate calmly reassured me that it wasn’t that big a deal. (Clearly his idea of not a big deal did not match my own sensibility about a bucket of cow pee being delivered indoors.) “Really, it mostly drained out right away. We followed it with water immediately, and the cleaning impact was pretty small.” Happy not to have this demonstrated, I had to admire Daisy for her perseverance and initiative. She had only been passing through the house because she noticed the garden in the back yard. On my second day we learned that Daisy is pregnant, thus possibly accounting for her head butting insistence on getting scraps.

My first night I was jolted awake by the sound of grass being forcefully ripped from the ground. I realized that it was a horse or cow who had chosen that moment for a midnight snack. The roosters conversed raucously through the night as well and as I drifted off for perhaps the fourth time I realized that these entertaining yet aloof creatures were integrated into the community in a way they knew and understood. In two days I could only begin to observe and appreciate their roles. I would have to settle for imitating the calf who bellowed like a bull. The rest of the mysteries would have to keep for another time. I could live with this.