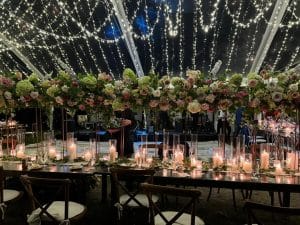 Last month I had the pleasure and honor of attending two weddings, just after Labor Day, both taking place the night of the candescent full moon. Both were couples in their thirties who had been together for several years, at least. But in some ways, they could not have been more different.

The venue for one was a beautiful wooded YMCA camp on the water in Rhode Island. We were at the buffet the evening before, with the bride and groom-to-be sporting matching jungle outfits. Many of their friends pitched tents in the clearing. Our daughter strung a hammock that balmy weekend: her favorite. The following day, which we missed, but saw photos and videos, the couple donned a variety of outfit changes during the afternoon and evening of the music festival they had curated to celebrate their wedding. Vows occurred in the late afternoon, officiated by a dear friend dressed in an Elvis costume. His thoughtful, and pithy words were clearly meaningful to everyone there, and this was followed by the duo’s own vows to each other. The groom wore deep purple pants and a silver/purple blazer with leopard boots and his long hair loose. The bride made her entrance in a lavender sequined low cut dress with her leopard print boots and tattooed arm. Stunning.

A pig roast accompanied by a rockabilly band capped the festivities and the joy and delight were palpable even on video and still photos.

We arrived at the flower studded wedding at an estate in Orleans, MA, also on the water. The wedding party stayed at the mansion that overlooked the bay there. The tent’s clear plastic top was lined with white lights which sparkled and gave the reception a magical glow.

The officiant here was a rabbi who had known the bride’s family for over 35 years, and who brought her own charisma, and meaning of the depth of centuries to the bridal couple and family and to us as the onlooking participants. The groom (who is not Jewish) in his tux, and the bride in her gorgeous open backed gown were both radiant with intent and beauty. They, too, added their own personal vows to the words of the rabbi and the tradition of the bride’s family.

There was a ten piece band at the reception, small combinations of which were featured during the cocktail hour and dinner, but from the moment they busted out a tune at the reception, the dance floor was never empty. Again, the absolute adoration and elation between the couple and the families drove this memorable evening.

Although on the surface these two occasions appeared entirely different, there was a common thread of the obvious love and commitment already demonstrated by the couples, the enthusiasm and support of the community and the rapture of celebration in a way personal and honoring of each duet. To be a part of such a ritual is uplifting in a way that little else is. The thoughtfulness that went into each of the events (down to the decorations on the pedicab that drove one couple, and the wood carved names at the tables of the other), made clear that each couple was including the guests in their love. They basked in the glow of what a group of close friends and relatives bestow on their vows and couple-hood in recognizing them as a new family, and entity in the world.

We celebrated our own thirty-fifth wedding anniversary two weeks later, and the feeling from our own event is still strong in my mind, reinforced by the exhilaration of the newlyweds. I think of the road that we have traveled, and how much unknown lies ahead for these two pairs, and  hope for them that the sustaining power of their  tolerance, curiosity and thrill in each other will continue to overflow in abundance to carry them through to celebrate their own thirty-fifth, and be the community for those loved ones to follow on in their own shoes, in their own ways.