When our daughter asked if anyone had acquired new skills or hobbies since the onset of covid, it was pretty clear that she was not including the dogs in this query.

True, they have become more comfortable and (dare I say it?) calm and confident, having my husband home for almost four months, and both of us around more than usual. 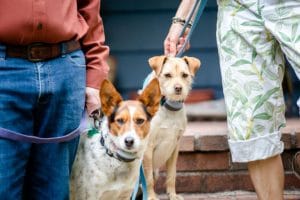 Kit, our thirty-five pound “motivated” dog has always been able to open the French doors by jumping up and pressing on the horizontal latch. She had already learned how to clear the four foot fence, necessitating another two feet to be added.

Twenty two pound Livvie was all over her job as site contractor, taking her excavation work very seriously. There was one hole in which she could be completely lost from view before we filled in behind her. She sometimes used her skills to get under the fence into the pool area, where she remained trapped until we let her out. Clearly she hoped that her site work would uncover small rodents.

But we were wholly unprepared for Kit, usually adhered to my side, to make a foray to parts unknown. She typically trails me from room to room. Often, following a shower I’m convinced she opted to stay downstairs when I hear a sigh emanate from under the bed. The dogs sleep in our bedroom and supervise when we cook. They have an underground fence so they can romp and practice the one hundred yard dash while we watch and admire their speed. When it’s TV time in the evening, Kit always takes her place on the blanket lined couch before I even park myself. Livvie will saunter in when she surfaces from her latest dog dream.

Last week, however, Livvie was asleep on the couch before the second commercial break but Kit was not weighing in on program choice. “I bet she’s headed upstairs already,” I ventured. We had taken down the gate to the upstairs because she had started jumping over it when she felt the need to get upstairs for either safety or beauty sleep.

I was too interested in my program to check right that second, but when another show started I reiterated that I would go make sure that Kit was in her kennel. I totally fell asleep on that job and when I roused at ten, I got off my duff to reassure myself she was home.

As I rounded the bend to the kitchen, Kit was bursting in from the porch, having opened the door for herself. She glanced up at me with her lowered head from beneath her eyelashes, in the “I know I’ve been naughty,” guilty look. Yet at the same time, she looked completely exhilarated. She was a teenager coming home past curfew from her first party featuring some form of sex, drugs and rock and roll. With another glance, she headed straight for the stairs. “Real tired. Gonna hit the hay. Love you!” before I could get a closer look at her eyes.

Sure enough, both dogs’ collars blinked red, indicating that the battery had run down that corresponded to the invisible fence. And Kit had taken advantage- going who knows where for an hour and a half. Probably just as well I hadn’t known she was gone all that time; I would have been frantic. But I would have to put the kibosh on her new skill. Perhaps we could work on learning to attend to the command, “Come here!” instead.