Ending the year with a Bang! 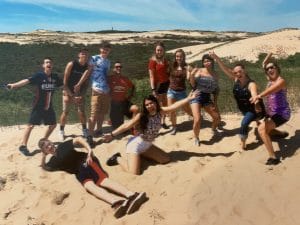 Their faces were a kaleidoscope of confusion, disbelief and then scarcely concealed mirth upon learning that I had agreed to chaperone a trip of high school kids I didn’t know on a five day trip. Our younger daughter graduated high school in 2012, so it had been a while since being with 9th and 10th graders.

Our older daughter had brought up this year’s Endersession trip to Provincetown in February. At her school, they take the kids on a five (more or less) day trip to various places at the end of the year. A Spanish teacher, last year she traveled with the service trip to the Dominican Republic. The year before she had chaperoned the group learning to surf on the North Shore. This year’s trip included a whale watch, a dune tour, bike rental and paddle boarding.

“Wow, that sounds great!” I had exclaimed. “I’d chaperone that trip!” We all laughed. and then a month later I received an email from her.

“Um, how serious are you about chaperoning?” she queried. “Two other teachers were supposed to go but now neither of them can.” I had offered, and I couldn’t renege at this point.

“Okay, I’m in!” Hoping I wouldn’t regret this, I put it aside until we were visiting with my college roomie at her Easter party. My friend, and a number of her friends, are educators with many years experience, hence their entertainment at my announcement. I was amused by their reaction, the wheels actively turning as they struggled to understand what had possessed me to make this kind of commitment.

Gale did all the preparation: estimating costs for the Airbnb house she landed, the van rental, food for all the meals. She arranged group rates for the tours, and put together an itinerary. She collected the funds, and kept track of medical issues, noting who needed an Epipen and under what circumstances. All I had to do was show up, and start with driving the one girl who called Shotgun in my car because of her motion sickness.

The biggest challenge of the week turned out to be the weather which alternated between gorgeous sunny days and torrential rain. This involved ongoing rearranging of the schedule, which Gale communicated regularly via group text to a Google number she engaged for the week. This was a vital tool, keeping expectations as clear as possible.

In my selfishness I initiated stops at Chequessett Chocolate for ice cream made only of bananas, (covered in hand crafted chocolate) and also PB Boulangerie, an authentic French bakery with mouth watering and gorgeous delicacies.

We were stunned by whales at sea, unfathomably huge creatures with jawbones that reached from floor to ceiling in the Tower Museum. We loved the trek through the sand-scape to the ocean where a seal awaited us. The leader of the dune tour set up an amazing panoramic photo in which we all stood seriously in one spot, and then ran around to his other side and gave our goofiest poses, with both group shots ending up in the same photo.

The very best part of the week, though, was being with the kids, the fabulous nine. They were boisterous, did not always agree with one another or necessarily like every part of the plan for the day, but they were unfailingly punctual, cheerful, game to do something new, agile about changing plans, cooperative about cooking and cleaning up, and inclusive of one another. Not to be taken for granted, any of it.

We made copies of the group photo and I’m thrilled to have mine. To say it was a successful trip is to so undersell the value of this trip. Experiencing the otherworldliness of the dunes together, photographing the sunset on the beach, watching the iconic whale tail disappear beneath the waves are unforgettable. For most, it was a first visit to friendly Provincetown. I have sparkling memories with my daughter to cherish. Would I do it again? Who knows? It would be hard to top this experience.

Now the kaleidoscope of expressions is on my face: delight, appreciation, awe, and a little wistfulness that it’s all done.