Honk if you’re trying out Craigslist 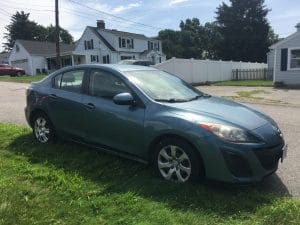 Perhaps listing a car is not the best way to begin a relationship with the Craigslisters. But that’s how I jumped in at 7:30 on Wednesday morning. I had very reasonably priced the car that our daughter drove while she was in the area for eighteen months. It was a 2010 Mazda 3 sedan with 136,000 miles, in terrific shape for its age, but still a car that was a bit long in the tooth, or at least the tire. It had a few minor dings, but was mechanically sound. I knew that used cars were at a premium lately, but I did not realize that by 7:35 there would be a response from a reasonable sounding person expressing interest, and asking how quickly he could come see the car, with cash in hand. Good I listed this baby on a day when I was not in the office. I was going out for a long bike ride, and suggested we meet at noon.

When I returned from my ride around 11, I there were half a dozen more people who had responded and I decided to hold off responding until after my noon appointment. He was right on time, and let me know when he was en route with his sister. They were nice folks, both in graduate school. He started examining the car, using a flashlight to get to places where the sun don’t shine under the hood. If you closely examine any elderly human or thing, you will find imperfections, and the ones he found on the Mazda were enough for him to politely pass on the car. They had been looking for a year, and I realized that they were really searching for something that is a bit younger, with nicer legs. At the bargain price of $3500, they were not going to find a pristine automobile.

The next guy on the list had emailed three times. Once to express interest, a second time to give me his cell number, and a third time to say that he was buying the car for his elderly neighbor and really wanted to help her out. Ok, a bit suspect, but I called him. He started warning me that I should be wary of people on Craigslist. “Let me tell you something,” he would say. I found myself struggling to interrupt to ask if he wanted to actually come see the car. On and on he went, until the fifth time he wanted to tell me something I blurted out, “Don’t tell me something!” Before I could ask if he wanted to set a time, he screamed, “You’re going to be like that? Who wants to come and see your piece of sh*t car anyway?” We hung up and he texted me, “Try to be nice. Thanks for making this easy for me.” I declined to respond in any way, as reciprocally, he had made it easy for me, too.

The appointment I made for 5 pm texted me a photo of a deployed airbag at 4:57 and said that he couldn’t make it. Uh huh. I spoke to an amiable fellow who offered for me to bring the car up to him an hour away because he was catching a plane at 4 am and had no way to get down to my house before then. Or I could wait until the following Tuesday when he would return. The guy at 5:30 arrived on time, sending the dogs into a tizzy because his adorable St. Bernard was languishing in the back seat. His wife was with him and they wanted the car to surprise their 23 year old daughter. He had forty bucks on him, which was not enough for me to hold the car, but promised to return in fifteen minutes with $500, which indeed he did. And said he would return the following evening with the rest, which he did.

I emailed the rest of the interested folks, including one who wondered if I would help her out and sell to her for $2000, and removed the listing. It was a whirlwind, but I now know that people are out there, scanning assiduously, and I will buckle up when next I toss up a listing for old Craig