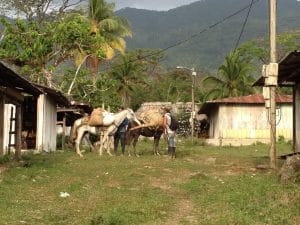 After a day in Medellin, a large city set into and completely ringed by mountains, and three days in Cartagena, a port with an old walled section and beautiful architecture, we set out for Apartado, in the west of Colombia, and then to the pueblo where Gale is currently making her home. The half hour ride in from the tiny airport took us past mile after mile of banana fields. Gale was pointing out the various types and sizes that were growing.

Our taxi left us off at the station where we would get our jeep ride partway up the mountain to L’Holandita, a sister community to hers where we would spend the night since it would be dark by the time we arrived. Gale inquired about the leaving time of the jeep, and learned that we had enough time to dash to the market for some food to cook that night. When we returned , we hopped under the roof of the open air back along with a couple of women, two young girls, and a young man. We fit comfortably in the jalopy which could easily seat four adults on each of the two bar seats that faced each other. Another man tossed a bag on top, and stood outside on the back fender, holding on to something I could not see from where I sat. We set off and stopped five minutes later. The man at the back hopped off, pulled a few eight foot long wood boards from where we parked, put them on top of the jeep, and off we went again. We made a couple more stops and then dropped off the whole load, to Gale’s dismay, because after a half hour of travel we were within a block of where we started.

“This is very unusual,” she explained. “A couple of stops, maybe, but not so many that we’ve now added a half hour onto a usually 45 minute trip.” We finally headed out of town, making a couple of quick drops, and then came upon a swarm of children getting out of school, perhaps? At this hour? It was past 6:30 pm. A couple of policemen pulled over our vehicle. Everyone needed to show ID. We retrieved our passports easily, but a couple of people had to get their ID from a bag that had been tossed onto the roof of the jeep. Nothing else happened and we were sent off within ten minutes. The rest of the trip was in darkness because this close to the equator the day is always divided nearly in half and by 6:45 it was completely dark. I couldn’t see the greenery that I could tell now surrounded the potholed, gravelly road. We stopped a few more times to let off a couple of people, or a bag here, or a message to that person until we arrived at La Holandita and jumped down with our backpacks.

A nun dressed in chino pants and a tee shirt greeted us, as well as a Bosnian girl and a German girl who both spoke perfect English. They, too,were staying there for the night because they had heard about the intentionally peaceful community and wanted to visit it. We all made food on the two burners that comprised the stove. The Bosnian girl had learned to make arepas while living in Venezuela for three months. (They are a type of flattish cornflour bread that could be sliced and buttered or eaten with cheese.). We cooked our vegetables and the German girl made lentils. We feasted and chatted and turned in for the night under our mosquito netting. I had feared that I would feel claustrophobic but it is so light and see through that this was not really the case. Gale elected to sleep in the hammock in the main area instead, preferring the open air to the slightly moldy cast of the mattresses.

Not long after I managed to drift to sleep I heard some kind of flapping outside my window. I couldn’t quite place what it was, although I kew it was not wings. Seconds later a rooster close by crowed like mad, setting up a series of calls like the game telephone, and I could hear the ripple of roosters going around the small community. Then, like a wave, it restarted with the rooster by my window, delivering an equally urgent and compelling message, and spreading with the same efficiency. After a third round of this, a dog responded with a long and plaintive howl. This set off a new call and response from the roosters, not to be outdone by a single canine.

Pondering the reason why this was happening at midnight instead of six am, I shifted on my super firm two inch thick mattress and welcomed a bit of shut eye into my humid bed.

An hour later, a nearby cow lowed. Nothing serious, it had probably just noticed a few pigs in its path. This received the same enthusiastic narration from the roosters who clearly could not let any comment go without a conversation. Who knew they were so freaking social? I ventured outside my net to the bathroom, hoping they would not see fit to declare this another reason for comment.

I must have drifted off again because next thing I knew it was three am, and a delicate melody as if from a music box filled the air. In my extreme disorientation I could not place where it was coming from and after a minute it stopped. I realized it was probably someone’s cell phone, though why it was ringing at 3 am was baffling. Fifteen minutes later the same delicate melody repeated, again with no response from its owner. Or the roosters, which was a relief. When it went off again 15 minutes later I nearly jumped out of bed, ready to throw it in the large basin of water that served as part of the sink, and was sooooo close by. I didn’t but I did hum along with the tune this time, not quite getting the last little bit right yet. I heard rustling and the pressing of cell phone buttons, and the creaking of the bed on the other side of the wall.

At four, the rooster contingent had something else to discuss, and the ring leader outside my window made sure that all the roosters in the camp had it clear before settling back down. And at 5 am someone a few houses down the grassy path demonstrated the “one up, everyone up” rule and blared Reggae so loud I was shocked that the rooster had no response. More surprising to me was that there was no discernible human response, either. Were people so accustomed to noises of all types that they could screen out all but those that pertained to them? 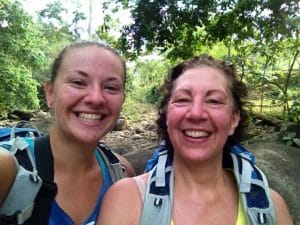 I have not been blessed with the heavy sleeping gene, so I was able to witness each event as the night unfolded. I recalled when Gale was five years old and I mentioned that I was a light sleeper. “Oh, then I must be a dark sleeper because I don’t wake up at all in the night.” she replied. I was hoping this skill still applied at age 23.

By 6:30 we were all awake, making coffee and oatmeal, and preparing for our two hour hike up the mountain to get to Gale’s community. I wondered whether the roosters wanted us to convey any messages to their brethren there. I hoped not. My Spanish was still weak, and I had other plans for my night than deciphering conversation between the community’s fowl. Armed with my broken night’s sleep I breathed deeply and looked around at my spectacularly lush surroundings. And this was just the beginning. I couldn’t wait to learn about the rest.