Inspired by the Magician and his Wand 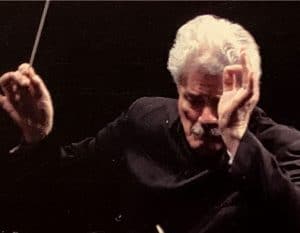 My dad was principal oboist in the Hudson Valley Philharmonic, where I grew up. This meant that several times a year, I was wrested away from my beloved Addams Family to get dressed up and go sit in the high school auditorium and listen to a symphonic orchestra play the likes of Beethoven, Mozart, Brahms; all those deceased European guys. I’m sure there was more variety- certainly my love of Copland came with my early training, but at the time, I struggled to sit still. It was fun that my dad always started the orchestra off with his bell-clear A, transitioning the group from the cheerful cacophony as they warmed up, to organized tuning before the performance began. I realized that it is only with a full orchestra that we are afforded the fun of watching and listening to them doodle onstage before a performance.

I took both violin and piano lessons, and played in the orchestra, accompanied and sang in multiple choruses, and when I was in high school myself, I helped usher at concerts, and ran around with the other high school music kids making mild mischief in the halls, trying not to laugh too loud. Not great to be the one busting out in guffaws in that brief silence between movements of a symphony.

My love of classical music grew-particularly with the help of my piano teacher, who both made it exciting, and helped me to understand how to emphasize the melody (whichever hand it was in) and to appreciate how dynamics and tempo could completely alter the feeling of the music. He provided context for the pieces and he developed a show where he played Chopin and would talk about Chopin’s life in between his virtuoso performances of his music.

Although I played a lot of music and continued to sing in college and beyond, I knew that I lacked the discipline to take it on professionally. As an adult, my husband and I attend classical concerts occasionally. We both adore live music and more frequently see bands of our era, and current artists in various genres: jazz, bluegrass, folk and rock.

We have the privilege of living in a small town with a professional orchestra- Indian Hill in Littleton, soon to move to the state of the art facility in Groton. Last night was the first time we have been to a performance of theirs in three years.

It was thrilling. I sometimes tear up at the beginning of performances—amateur or professional— because of the connection between audience and performers. I appreciate the human hours of individual and group practice and the hours driven to gather and listen/watch. This time it was seeing a stage full of musicians with concert black masks that added a jolt to their stately visual costume. The program—Borodin’s Polovtsian Dances from Prince Igor (you would recognize the music even if you don’t recognize the composer), Missy Mazzoli’s These Worlds Within Us, and Shostakovich’s Symphony No. 5— all played without intermission (covid style) immersed us in a range of beauty: from the familiar to the scenic, to the majestic—all at the hand of Maestro Bruce Hangen. I was mesmerized from the beginning, moved by the soloists, particularly the oboe, as it brought my dad to life, by the orchestra as a whole and Hangen in particular. My dad always had several performances in a few towns for each program, but this concert was the culmination of all the coordination delivered to us in one glorious swoop.

I’m sure the absence of live music during this unprecedented time highlighted the delight of being there in person—something no streamed version can ever replicate. Hangen’s passion, and clear commanding direction brought out shades and nuances of color that left us all standing. I’m so grateful to have been there to drink it all in, happily thirsty for more.