I received a call from our next door neighbor, Beth, when we were away the other weekend. The call came in at 3, but I did not pick it up until 9 pm, as the phone was in our bedroom charging. Our daughter was staying with our crew of two dogs and one cat, as she has many times, so I was a bit surprised that there was a call from our neighbor.

“Hi, Meg, John (our neighbor across the street) found Livvie (our small, ginger colored dog) in the road on the side street by his house and picked her up. He said that no one is home at your house. Can you give me a call?”

Appreciating that it was 6 hours later, I first texted and called our daughter to see if she was already aware of the situation or had returned home. No answer, so I called Beth.

I recalled our trip several years ago with our former trio of animals when they had taken our elderly dog to the vet with what turned out to be pancreatitis. She was trying to reach us then because at 17, the question was really about whether or not we wanted to keep him alive. Visions of my calls to the vet from the foyer of the bed and breakfast where we were staying in the Scottish highlands, (the only place there was any cell service), and me shouting into the phone (because they could barely hear me) that it was OKAY TO PUT THE DOG DOWN IF THEY NEEDED TO. Other guests trying not to pay too close attention to us as I repeated this several times to get the point across, and the rest of my family trying to keep themselves from busting out a guffaw at the morbid absurdity of it all.

“Okay,” Beth said. “Let me tell you the rest of the story.” Uh oh. I settled in, hoping it at least did not involve fatal injuries. Beth continued. “John called me, so I told him he should just put Livvie back in the pen.” We have an underground fence, and the dogs do not break out of it, even once when there was a coyote right outside our yard. But if no one is home, we have an actual fenced in portion with a gate that closes. The dogs have access to the porch from there as well, which is great if it rains.

“John put her in the yard and made sure the gate was secured. Then, a while later, Paul (Beth’s husband) came home. He looked over, and noticed, ‘That’s not Livvie!’ And in fact, there were three dogs in the pen!” I burst out laughing, relieved, and also imagining our dogs with some other random dog in their yard with them. She continued, “We walked over to the side street, and asked the people who live there if they were missing their dog. They took a look around, and realized that in fact, Emmet was not there. They have 3 kids, a busy life, and it had not registered that their incredibly friendly, high spirited dog was not around. I learned that he occasionally visits our neighbors on our other side who also have two dogs. He will hang out there for awhile until he gets walked home. Emmet’s parents followed Beth and Paul to our yard, and retrieved the sprightly fellow from his unanticipated play date. And all is well that ends well. My only concern was whether our dogs had been kind hosts. They love other dogs, but I was not sure how they would take to hosting an unannounced friend.

Our daughter called back a bit frantic, having come home by 6 to feed the dogs, and they were there as usual, seeming just fine. She went out for the evening, and saw my call sometime after 10, but howled upon hearing what had transpired during her absence. And now all that is left is for me to contact John, and thank him not only for his kindness in worrying about our Livvie, but also for the endless entertainment this story has provided.

Here they are: Livvie, Emmet, and Kit, in that order. 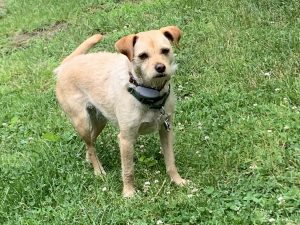 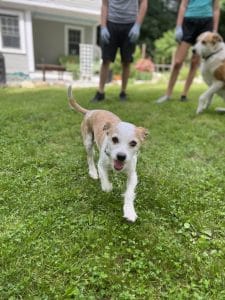 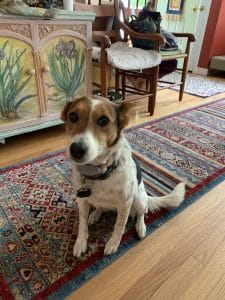