Why are you talking logic to a crazy person? This question was intoned by my friend’s 91 year old scientist father, directed at her after she tried to explain why a thirty-five thousand dollar check he had just deposited wasn’t really his, because it was money from the insurance company to cover the costs of damage to his apartment. Logic had always been his dedicated realm, as his experiments demanded high levels of linear thinking. His hold on this form of thought had loosened in recent years, and his question, though it made us both laugh, was incisive and bittersweet.

I thought of a parallel conversation I had just had with my own mother of 90. We had deposited over a thousand dollars into her account, which she then had to turn around and pay her acupuncturist, the only provider they reimburse in this cumbersome structure. I offered to handle the check writing to spare her the pain and confusion of watching this windfall so quickly exit her account, which she gratefully accepted. 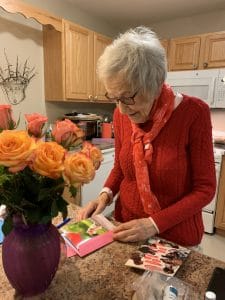 Other evidence of the uselessness of logic came in the form of her father’s insistence on stockpiles of dog treats. As they moved him out of his own home and into hers, she watched as they loaded huge bags of heart shaped treats, chicken jerky, beef jerky, bones for cleaning teeth and every conceivable Hubbard treat known to dog. “Dad, I don’t have room for these in the cupboard.” He agreed to store them in a large plastic container in the room they created for him. When down to only two enormous bags of treats he became anxious and requested they go out for more.

The parallel with my mom that very day was going to the grocery store for a specific low/no sodium bread. I bought a couple of loaves and when I returned to her home to freeze them, discovered four more waiting patiently for their turn to come out of the cold.

I have no doubt that I will have my own version of something that’s so vital to me that I demand to have lots of them no matter how mundane or readily available someone else thinks they are. It wasn’t so long ago that we would buy a half dozen or more bags of Central Bakery’s Portuguese muffins because they were doughier and less sweet than all other brands, and we could only find them when we visited relatives on Cape Cod. Thankfully, they’ve finally turned up in our local market.

My husband confessed that he got squirrelly noticing that his precise brand of body wash was down to the last bottle. Nothing else could address his dry skin in exactly the right way. We all have items which make life easier, better, or more joyful and this is perhaps magnified in the elderly.

Fortunately in these instances, there is no need to insist that logic prevail. There’s no harm done in storing a copious variety of dog treats. (There is a 75 pound dog to enjoy them, by the way.) My mom’s freezer can still accommodate the designated vanilla peanut butter fudge ice cream that she has deemed perfection, and that’s what counts.

Hopefully we will have additional tools available to use when we discuss more sensitive issues. The important thing seems to be able to hear our parents as their own line of thinking shifts in ways that make sense to them. The better we are able to tune into them, the more responsive we can be, reserving more serious conflicts for critical matters and keeping everyone happier.