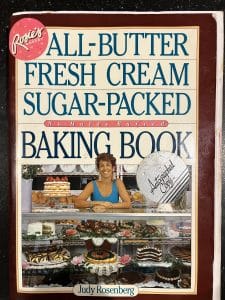 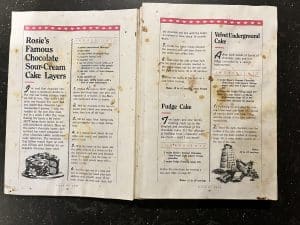 As I was pulling out my battered Rosie’s Bakery book to make a cake for our daughter’s birthday, it was fun to find this piece written at least 16 years ago, when we were evidently having company on my actual birthday, but really celebrating a few days hence, thus producing the dilemma about what to do for dessert for the company on THE day.

I realized that I was going to pass Rosie’s Bakery and thought I would offer to pick up a birthday cake. When I moved to Boston in 1981, I lived a short walk from the original Rosie’s in Inman Square, Cambridge. My fellow graduate student and I would reward ourselves with Chocolate Orgasms or Boom Booms when we finished a paper. Now there are several of them, but I don’t live near any of them, and this seemed an opportunity too good to pass up. I left a voicemail at my husband’s work, and also his cell phone,  and put the phone in my car drink holder so it would be handy.

Minutes later I was closing in on the irresistible bakery, and I could do nothing other than pull in and check it out. I have used the Rosie’s baking book so often it is literally falling apart at the recipe for the chocolate layer cake. It is also so spattered with my original attempts that it is nearly unreadable. This doesn’t matter because I have long ago memorized her precise recipe which duplicates the moist cake with makes everyone moan with delight.

In the store I had to ask what was inside all the cakes, and none of them seemed exactly right, plus my conscience was pricking at me that my husband may have other plans. We had agreed we would wait until our older daughter returned home to completely celebrate. But this was Rosie’s. I finally decide that the gorgeous fruit tart would be a perfect, non-cake alternative and the friends who were coming the next day would also enjoy it.

Relieved that I was able to get out of Rosie’s with only one item in tow, I returned to my car and cell phone, with two missed messages.

“Hey, stay out of it!” my husband emphasized. “You’re not supposed to pick up your own birthday cake! I’m on it!” he exclaimed. He sounded more amused than annoyed, and I called him back.

“I didn’t actually get a cake,” I rationalized with him. “I know that you’re really busy, and you haven’t said anything, and people are arriving at 11 tomorrow, which is my actual birthday,” I dug myself in further. He reluctantly agreed that it wasn’t a totally terrible idea, leaving the door open for real cake in a few days when Gale came home.

The next morning I came inside from my bike ride to a message from the visiting friends requesting a call back. The question she posed was, “Do you want us to pick up a cake?” (They live near a terrific bakery.) I laughed and replied, “NO! No cake!” and explained what had transpired the day before. I called my shopping groom to tell him and he chuckled when I relayed the new cake offer, and said, “Hey, Kate (our younger daughter) said the same thing. How can we not have cake on Mom’s birthday?”

Okay, OKAY, I relented. “Pick up a flipping cake.” I know defeat when I see it, and who am I to protest cake? I mean really. There are no laws, even unwritten ones, about how many cakes one is allowed on or near one’s birthday.

When they returned, Kate and Duke pointed to the bag with the cake box and gave me stern orders to stay out of there. I was secretly relieved to see the square shape. My husband whispered to our friends about the purchase, who declared that everyone, including their two young (chocolate loving) sons would be pleased.

As the appointed hour approached they shooed me out of the kitchen (and only asked once where to find candles). I sat awaiting my just dessert as the singing procession approached greeting me with the beautiful tart, and …six golden Sesame Street cupcakes! I burst out laughing, impressed that they, too, had satisfied the dessert requirement without a traditional birthday cake. They remarked that the cashier had noticed how pleased they were with their purchase. “Is this for a 50th birthday?” she asked. Not quite, but damn close. They were stunned that not knowing a thing about them, that she could make such an accurate guess.

So, we’re not the only ones with a cake dilemma. I’m glad to know we’re in good company, and now I’m looking forward to the homemade Rosie’s sour cream chocolate layers with the deep chocolate frosting you make in a blender. Mmmmmmm. Happy Birthday for me.