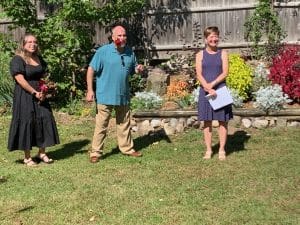 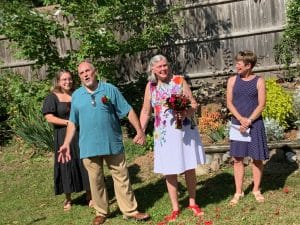 Our friends were married last month. Not the first rodeo for either one, both with children, from mid twenties-fifty. We were a small group of around thirty-five guests to mark the occasion. Though we don’t see them often, my husband and I both know the groom since our early teens, and met the bride a few years ago when the couple re-discovered each other and entered a blissful and starstruck dating period.

From the moment our friend mentioned his now bride, the joy that spilled forth from his smiling countenance was a delight, a gift that rained upon anyone nearby. “We’re not talking marriage,” he disclaimed in those early days, but the sheer lightness and shine in his eyes belied this declaration. So we weren’t surprised when they stopped by on their way back from New Hampshire earlier this summer to tell us about their plan for September.

A hot late summer day set the scene for their backyard vows, officiated by a close friend who disclosed that the power was invested in her from some online place in the midwest. The couple were both milling about as we arrived, the bride in her white dress with colorful flowers, fitting for the master gardener that is her avocation. The groom was in silk trousers and a smart teal silk top. They were both glowing and excited as they tended to last minute details: someone to film/Zoom for those unable to be present, checking with the caterer who put out mouth watering appetizers and a four star meal for us all to savor under the small tent at the end of the yard. (I’m still drooling over the mushroom ragout.)

We didn’t know anyone besides the couple themselves, and his daughter who we had not seen in many years, but people were friendly, taking an interest in who we were, from where we hailed, and how we occupied ourselves.

I always say the the playlist drives the party, as I am so checked in to the tunes that make me jump up and dance, or hum under my breath, but even without music, this bubble of cheer and absolute happiness that emanated from these two was enough to ignite the gathering, making us feel privileged to be a part of it.

Their promises to one another were delivered with the real knowledge of what it takes to make a marriage work and both of their dumbfounded- ness that they had found one another in their sixties after many years of being divorced and single.

There were even goody bags for the guests, thoughtfully put together with a small bottle of champagne from the groom’s wine store, an apple from the region of New York where they lived, hand made chocolates from her favorite store in Connecticut where her family lives, and succulents from the tables. They had put their love into this event, and we were recipients, riding on the high of this bountiful tide. I’m sure their own returns of the day will continue to arrive in waves they will create throughout the years. What a sweet memory to brighten this pandemic autumn.