My daughter told me of a group with which she was studying the words of Peggy McIntosh about White Priviledge: Unpacking the Invisible Backpack.  McIntosh lays out the many ways in which any white person takes for granted every aspect of life, and the ease with which it is possible to move through the world.

It brought to mind my experiences growing up in a small city in New York State’s Hudson Valley that was around 30% Black, and the tensions that grew in that small town. 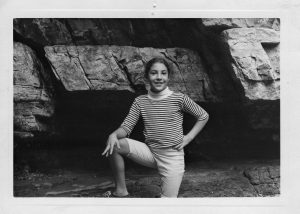 I flashed upon an incident that occurred in sixth grade, the oldest year of Elementary School when I attended in the 60’s. I was “asked out” by a boy named Barry who handed me a written note with that question. It was a torn portion of lined paper that he folded. I was quizzical when he handed it to me, having no idea what he could be writing to me about.

Looking at it later, by myself, I was a jumble of feelings. I somehow knew that since he was Black that he would assume that it was because of race if I said no, but I was not interested in “going with him,” or anyone. In sixth grade I was wearing shorts underneath my dresses every day so that I could play kickball on the cement playground during lunch or recess, or hang upside down on the jungle gym. I was annoyed when boys told me that I ran “fast for a girl.”

I was in a quandary about what to do, but ultimately could only tell him that I did not want to go out with him. I felt miserable when he disgustedly said it must be because he was Black, and I felt helpless knowing that there was not a way I could console or say anything that would make sense to him. I clearly did not have the language, even though I could see what was happening. I was powerless to prevent his hurt and anger. And I could not fully understand my own relationship to race at that point.

I knew I was embarrassed by my grandfather who called people Coloreds, or worse. We would correct him, but he didn’t really buy it, and was too entrenched in his own way of thinking to really consider the feelings of others.

I can see now how much courage it took for that boy of 11 to ask out a white girl. There was not only race, but I’m sure there were also some socioeconomic aspects. My family lived fairly near the school in a squarely middle class home with 3 small bedrooms. My parents were both educators, drove VW bugs and considered themselves liberal. I’m sure this boy lived on the other side of the wide boulevard that ran through the center of town, truly Broadway. I had some vague awareness of these differences, but in sixth grade there was not hostility, as experienced by me.

I don’t remember if I spoke to anyone regarding his question. It’s possible that I might have brought it up to my parents, but can’t be sure. I do remember the bewilderment, and how ill equipped I was to talk about any of it. I wonder if Barry had anyone whom he could speak with, anyone who could help decode the challenges of race in a small town. I wish I could have told him that he was more sophisticated than me, that he was way ahead of me in every way. And that he should continue to push boundaries and listen to himself about what is important to him, what is compelling.

Fifty years later we are still struggling for all voices to be heard, to erase the lines of inequity, looking for the times when the very conversation itself is unnecessary. Even seeing racially mixed couples on TV, or in magazine ads, we are still a long way from arriving. Until then, we must all find the ways in which we honor those lives who have not been born with the arbitrary privilege associated with pale skin.