The heart wants what it wants

Discussion wanted. This was the heading of the email from the social worker on the unit where my mom lives. Uh oh. What could she be up to? What mischief this time?

I read further. She would like to have a conversation with me regarding a relationship that my mom has developed with another resident. And she asked about possible times later that day or the next.

I had heard from my mom’s former aide, with whom she’s very close, and also from a friend who had visited, that my mom had feelings for another resident. Mom had not mentioned it to me at that time, which was interesting, and I waited to see when she might bring it up. It happened the weekend before receiving the above mentioned email. I was visiting in her unit, which had previously been forbidden due to covid restrictions. I was spending time organizing her closet with its exploding contents of colorful clothes, and we chatted while she watched and I hung things up in some semblance of order.

“There’s a man here who I have a special connection with,” Mom offered. 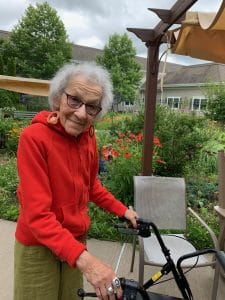 “Oh, yeah? Tell me about him.” Oops. I forgot the cardinal rule that it was extremely difficult for Mom to create descriptions of any kind at this point.

“Well, we just have a special connection,” Mom concluded and we both smiled.

“How lovely!” I responded. “Maybe you can point him out to me later,” I suggested. The nurse came in and suggested that my mom take her lunch in her room while I was visiting. “Sure!” Mom replied. When it didn’t arrive right away, Mom ventured into the hall.

She poked her head back in the door. “He’s there at lunch. Would you mind if I went and had lunch with him?” She asked anxiously.

“Of course, but I think they may be counting on bringing it to you here, now. Whatever works out is fine.” Mom nudged her walker out the door again and was gone for a few minutes while I wrestled more clothes out of piles and onto hangers. She did end up eating in the room, but again disappeared and when she returned told me she had asked her gentleman friend to stay in the lunchroom so they could visit. She did indeed indicate who he was as I left, so I have a clear image of his profile and glasses.

“Your mom and this other resident seem to have mutual affection for each other,” the social worker explained. That was good. I knew that my mother could be very persistent about something she wants. “There’s hand holding and back rubbing going on.” I smiled. “We just wanted you to be aware that it’s possible that they could spend more time in private.”

“Well, they are consenting adults,” I observed.

“Yes, in fact they are,” Annette confirmed. “Even though they both have some memory challenges, they both have the capacity to be aware of what they do or don’t want.”

“So you think they are both safe.” I stated.

“Yes, we believe that their feelings are mutual, and that there is no safety risk to either one.”

“Well, good for them!” I replied. “I’m not inclined to interfere in any way if this is something that is nice for them both.”

“That’s great.” Annette seemed pleased with this. It felt odd to be consulted in this way, but I appreciated that as I am responsible for several aspects of Mom’s life right now, they wanted me to be in the loop. And how wonderful for them enjoy their special connection. Here’s to being 93 and open to it!