To Grin and Bear It 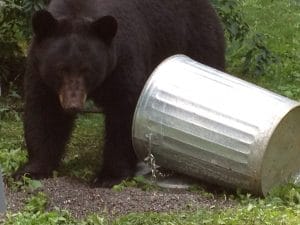 I arrived home from work at 3:30, and knew that I had a half hour to be ready to head out to western Mass for the night, a tall order to include feeding the animals, walking the dog, getting the rest of the picnic together and making sure my bag was packed. As I took the dog for a spin in the yard I noticed that one bird feeder was knocked over and completely bent (one surly squirrel, eh what?), and also that the metal trash can which I had just filled with bird seed was also knocked over and partially emptied out. (very clever and nimble woodchuck to get the chain off the top of it..) I refilled it as much as I could in 2 minutes and headed inside to prepare for take off.

We were just about to enter the Shed at Tanglewood where we were set to see the Goat Rodeo Sessions when I decided to check my messages to make sure that everything was ok at home with our animals and our friend, Kate who was taking care of them.

There on my phone was a photo of our driveway, and in the center of it was a BEAR!

What?! Another message revealed the bear hard at work cleaning up the bird seed that had been knocked over earlier.

I was seriously annoyed that I was not there to see it, and would have been even more miffed had we not been about to see one of my favorite musical groups. For those who don’t know, The Goats are comprised of Yo yo Ma (my musical hero, being as kind as he is talented, as adventurous as he is generous), Chris Theile, MacArthur winner mandolinist, and world class bassist and violinist respectively, Edgar Meyer and Stuart Duncan. My husband suggested that if I dump a box of Dunkin Donuts out there that I could expect a return visit. As long as it was willing to leave me the cruller, I thought this was a reliable (if crazy) plan.

The concert completely absorbed me and I did not think too much about this missed opportunity. When we returned home the following day, Mr. Dog made clear that he needed a jaunt up the street. We were on our way to the back door when our neighbor next door spotted us and said, “You know there’s a bear at your house.” “Yeah, last night, right?” (Her mom had sent some great photos.) “No, right now!” she exclaimed. I looked up and there at the bird feeder was The Bear. I ushered Mr. Dog around to the front of the house, and called my husband. “It’s back!!” I said. “What?” he wanted to know. “Look out the window!” I hollered.

For the next nearly an hour we photographed, videoed, messaged and did everything but have the bear in for tea. I was on the back porch, separated from the bear by about 6 feet and a plate of glass, and it seemed completely unbothered. I even went out to the deck, behind the chain link fence to get a better view, and again Stella (as our daughter Gale suggested we call it) seemed unperturbed. Something caught its attention, and it stood up and stamped its feet. I couldn’t imagine that there were still any squirrels or birds in the vicinity. It was only a bit later that I learned that my husband had snuck around from the front to get a better view. The bear caught sight of him and obviously made a statement which sent my husband high tailing it back into the house.

The police were kind and I was relieved that their only suggestions were to stay away from it and not feed it. They assumed it would go back into the woods, which it eventually did. I realized that it was heading toward the neighbors on the other side, and called them immediately. Their five year old loves to ride her bike around the yard. Dan answered and informed me that the bear had been by their place the night before and knocked over their bee hives. The bees! I had forgotten the delectable honey that had come from them last year. So the bear was doing a neighborhood crawl with stops at all the right places. I wondered who was providing the drink. This was clearly a very healthy, well fed bear.

I was sad that we needed to do the responsible thing and clean up the bird seed as a way to disinvite this lovely creature back into the area, but I’m thrilled that we had a close encounter of the bearest nature. A case of be careful what you wish for had turned into my dream come true with Stella. Though our dog seemed completely oblivious and the cats showed about as much intrigue as they do for the Finches and Woodpeckers which usually populate the feeder I could not have been more appreciative of this visitation. I’m looking up the meaning of this animal totem lest I miss the message that has been sent to delight my day.