Tri-Umph at the Appleman Sprint Triathlon 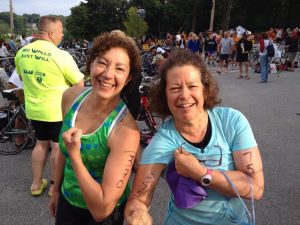 I put in a request for an overcast day for the morning of the  Appleman Sprint Triathlon. A person who melts in the heat, anticipating my most difficult leg, the run, as the third event, this seemed like a logical ask. Popping awake at 4:30 am, I peered into the early morning sky and noted with gratitude that my wish had been heard. A cool 59 degrees, this seemed like the perfect start to my morning.

A quick review of the contents of my backpack revealed that my wetsuit, goggles, sneakers, socks, energy gel, swim cap anklet timer and race belt with my number were all waiting for use. Since I was biking the few miles to the start, all my biking gear was on my person, including the number on my bike. All set for this half mile swim, ten (hilly) mile bike, and three mile run.

Arriving at 6:30 am, there were already lots of volunteers in neon yellow shirts directing us to the “transition area” where we set up our bikes and running gear while donning swim stuff. Everyone needs to proceed to the “Body Art” tent, where we get our race number written in marker on our arms, and our age written on our calves. Dual identification. There were places to buy coffee, bagels, swim and bike wear and a row of Thrones in a Box for pre-race prep.

People participate in this event for all kinds of reasons. Some are serious competitors, who will ace this thing and be home snoozing by the time I cross the finish line. Others, like me, are trying it out for the first time. I saw one girl who couldn’t have been more than 12, and heard that there was an 85 year old man participating in all three events. Swim angels are available to accompany people upon request.

I had already determined that this was going to be a fun event, but that did not prevent pre-race jitters. As we drew closer to the 8 am start, we collected near the beach in one of five colored swim caps for each of the five starting waves, four minutes apart. I was in the fourth wave with my purple cap, which meant that our group would begin twelve minutes after the first group. Just before our final ten second countdown, men from the first group were completing their half mile swim and dashing for their bikes. Wow!

The morning proceeded in a well organized and enthusiastically announced patter of activity. Any fears I had about being clumped too thickly together were dispelled early and never resurfaced  through swim, bike or run (kind of a silver lining for the less competitive). There were always other athletes close by, but mostly I was setting my own pace, and doing my own race. The volunteers and spectators clanged bells, clapped hands and shouted words of encouragement.

Love Shack was playing as I started my run, which meant including a few dance moves on the beach to get me going. The transition from bike to jog is still one to which I am unaccustomed and my legs tightened in protest. Tenacity ruled the day, though, and I persevered through the course, grinning like a loon most of the way.

“Did you win the triathlon?” my biking friend asked. Rotary Club (the organizer) donates the proceeds from the race to charity so that is the first win. The others come from the joy of being out there, moving my body, stretching my personal boundaries, and putting the Umph into the Tri-umph of the Appleman.