Widening the eye of the needle 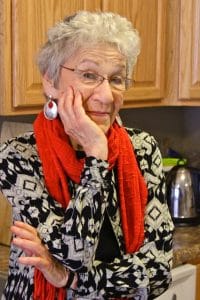 After many false starts to retrieve my 93 year old mom from the small rural teaching hospital where she was working with rehab, we were suddenly given clearance on Thursday for a transfer the next day. This was the opening in the eye of a needle— that slim margin of in-person connectedness between two facilities where visiting was forbidden.

Her covid symptoms were largely atypical, if they were covid related at all. It was not the breathing difficulties or cough or fever. It was the weakness and confusion. We could not travel the three and half hours to wave and blow kisses outside her first floor window because the covid rooms were vented outside there.

We had been waiting for two negative covid tests in order to go pick her up and bring her to the rehab at her own continuing care facility.  When these happened at the end of December I made plans to scoop her up. On our way there we received word that because of the holiday and extra days from the last test she would need another negative result, so pick up would be delayed a few days.

That test came back positive. WHAT?! Evidently this was not unusual and not indicative of active virus, but still not a go for transfer. The next one came back inconclusive. What the hell?!! Even my physician friend had not come across this. Then we had a negative and with toes and eyes crossed for a second one the required 72 hours later, we received word of a positive result taken immediately after the recent negative. I learned that the hospital where she was required two back to back negatives to take a patient out of isolation. So we were actually going to need three negatives in order to spring her?

At this point the CEO of my mom’s facility intervened. We both realized that this covid-go-round could go on literally for months. Now seven weeks out from diagnosis and asymptomatic, the health center could accept a single negative. This occurred the next day and I swooped in the day after to gobble her up: my one shot at visiting with her, that 45 minute drive.

Mom had been very confused by the testing: the negative, the positive, the double negatives. It is all so confounding, even for those of us who are more familiar. I reassured her that she’s doing fine and it was all a formality at this point. She was passing every test with flying colors.

In the stunningly beautiful ride from Ellenville to New Paltz through the mountains of the Hudson Valley, while I drove as slowly as I dared, we marveled at the views, at the wonder of being right next to each other. It was too little time to launch into big topics. And what did we need to talk about anyway? We could just enjoy being together, noticing the German Bauhaus that had been there since I was a kid that my dad loved, the apple orchard which had the best apples, the turn off to our family friends where we spent Christmas Eve, and then we were back at Woodland Pond.

We entered to balloons in the lobby and a decidedly jocular vibe in the health center. They were just wrapping up their first day of vaccinations, which had gone particularly smoothly, with no major adverse reactions. It was their first step toward a new normalcy and they were celebrating.

I bent down to give Mom a masked hug before they wheeled her down the hall, not knowing when I would be able to see her again. Tears welled in my eyes as I savored that brief moment, allowing the current to flow freely. The love we were breathing in connects us through space, time and the phone wires. We will have to be content with that.