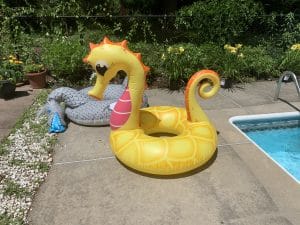 What says summer more than a six foot T-Rex that delivers water through its nostrils? As summer begins to wend its way toward cooler air, we paid a visit to dear friends who have a home in the heart of summer, Truro, Massachusetts. We have been to the Cape countless times, but for some reason this time I was completely captivated by the stores along the way boasting sales of the most delightful ways to while away an afternoon on Cape waters. Human sized pizza slices, and whole ones with mushrooms and pepperoni alongside a giant baseball glove or sneakers, bright pink flamingos and pretzels all called to me. Vowing to stop on the way home, I kept my eyes on the road and proceeded to our friends.

It was a beautiful afternoon, and we quickly made our way to the beach. Before we had even opened up our chairs, a sudden breeze brought a seven foot bottle of Rose toward us, tumbling side over side with its owner jogging behind to retrieve his wayward charge.

I glanced back in the direction he had come from and spotted an open shark mouth creating a tent on the beach. Well no wonder the Rose was trying to get away. Those teeth would surely spell the end of its plastic bottle body.

Returning my focus to the water, would I be able to spot a plastic tubular octopus with its legs waving merrily in the air? I scanned the waves, hoping for a peek at a giant Junior Mints box or multicolored popsicle supporting someone’s drift with the tide.

Clearly these were a necessity for pool life, too, right? My husband knew it was vital to indulge this shopping expedition, and we left a few minutes early on the Sunday to ensure enough time for me to examine my quarry up close. This did not help in the decision making. Thus began the discussion between my whimsical side, which demanded attention and was rooting for a half dozen additions to our limited pool toy box, and my practical side, which registered a sticker shock of $70 for the larger floats. I finally settled on a pineapple with a cut out in the middle for comfy cooling at a reasonable $27.

Once home, though, the notion of on-line bargains was suggested by a sage friend. This extremely satisfying shop ended in the purchase of an ice dragon, which my husband informed me is a Game of Thrones character. At less than $20, a good deal. The next day I remembered that my niece was due to come for dinner with her three children and that obviously we needed a third float. A bright red parrot with a yellow beak for $15 would be such a great addition. Amazon delivered these Prime suspects in record time.

We needed to cancel dinner with my niece’s family, but the floats had their debut appearance a day after their arrival with my 23 year old daughter and her camp counselor friends. Now they are resting by the side of the pool, making me smile every time I look out the window.

I will be sad when it’s time to deflate these fantastical reminders of summer, but will look forward to next June when they make their delightful appearance once again, heralding relaxation, downtime and all the deliciousness that summer serves up.